When I was growing up in the U.P. in the ’70s and ’80s, coyotes were considered the menace to farm animals. Back then, wolves were (temporarily, as nature assured) absent from the Yoop, so coyotes – kai-ohts – assumed the apex predator spot that Canis lupus should have held, and in fact resumed sometime in the ’90s.

I have no idea if any Yooper farmers lost any livestock bigger than a chicken to Canis latrans, but my male relatives were unanimous in their hatred of coyotes, and were eager to kill them all. I never understood why this was, but then I ever understood why it was fun to sit in a tree for hours in the hopes of shooting a deer either.

I did understand that the coyotes’ howls were thrillingly wild. When we stayed at our family’s hunting camp – a one-room shack in the northwestern corner of the Ottawa National Forest (almost a million acres of woods that covers almost all of the Wisconsin end of the U.P.) – we often heard coyotes singing at night. I lay there in my keeping bag in the bunk bed and imagined the coyotes sniffing around the building, drawn by scraps of food and our weird smells.

I don’t recall ever seeing any coyotes, but I must have, for as Dan Flores shows in his superlative Coyote America, coyotes are now America’s most ubiquitous big predator, despite continuing to be killed in the thousands every year. Some of the only actual coyotes I’ve ever seen – on a years’-ago bike ride – were three dead ones, dumped in a ditch not a mile outside of town. More recently I saw two skinny specimens patrolling a river near Island Park in eastern Idaho. They watched me and a friend bike along the opposite bank, then effortlessly scaled a sheer snowbank to get up off the river and onto the flat plain. 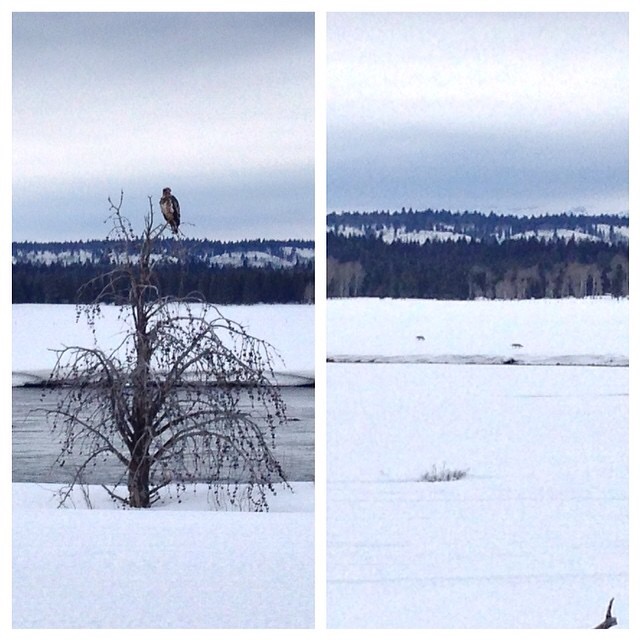 Notwithstanding this pair in the underpopulated West, Americans now live among more of these scrawny, intelligent, shy beasts than ever before – a story that Flores tells with care, detail, a bit on anger, and a lot of humor in his book and with indignation in this New York Times op-ed. After a century of incessant, brutal biocide against the coyote, we should admit defeat and admire the victor.

By rights, in fact, we Americans should do as generations of a Native Americans – from the Aztecs to the Apache – did, and worship the coyote as a nature god. Like God, Coyote is everywhere. As my friend Charlotte pointed out the other day, they’ve surely watched me on a bike ride. They’ve probably watched my girls playing in our backyard. A family of them might be right now in the field to the south, perhaps looking warily between the light spilling from my picture window and the harvester that’s growling along the rows of soybeans. Maybe they made a meal of one of the hundreds of Canada geese that gleaned in the field all afternoon. Regardless I’m pleased to know that they’re out there, outlasting and outsmarting us.