God, I love the day before races. The anticipation is so wonderfully energizing. The day usually includes some travel, often with friend, which is almost always great because I love traveling and friends, especially for a good reason like getting to a race.

But the day before a race also includes race-y stuff like eating and drinking right, checking in for the event, attending the pre-race meeting, and of course hanging out with other racers and volunteers and such.

If there’s time, the day before also might also include a bit of riding on the course – stretching the legs, getting a sense of the trail, and enjoying the scenery that race-day focus will obscure, like these pix from my pre-rides with the Marks at the Fat Pursuit in Idaho last January 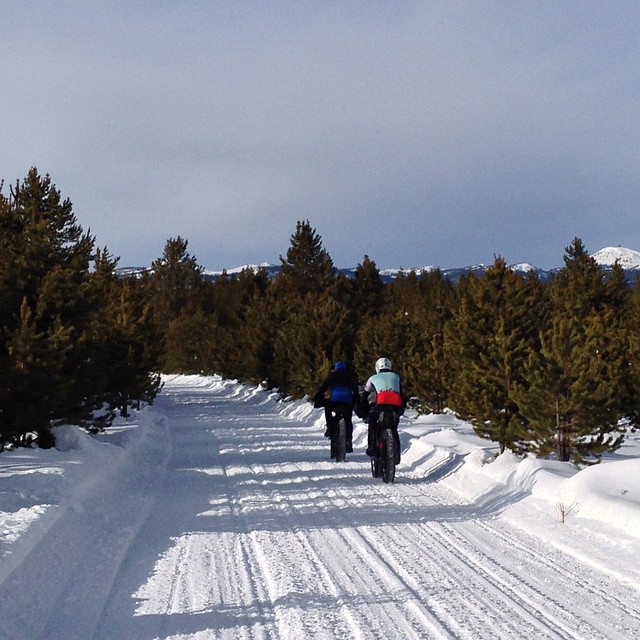 and with Galen, Ben, and Tim at the Maah Daah Hey trail in North Dakota in July.

My trip to the Tuscobia was less involved than either of those race trips, requiring just a short drive to western Wisconsin. But I jammed to my own music, sipped some good coffee, soaked up the views of rolling snowy hills, thought through the race, and stopped for a photo:

Once I got to Rice Lake, Wisconsin, I checked in at the hotel, ran a quick errand, and checked in at the race HQ, then headed up the trail for an hour’s ride. The conditions were very good, so I had a nice time and definitely built up a bank of good feeling for the next day.

Afterwards, I met up with my friend Ben (with whom I went on an epic trip to the first Fat Pursuit in 2014). We hung out for a while before we hit the registration and gear check, had a great dinner (pizza, of course), and then attended the racers’ meeting. Back at our hotel early in the evening, we set up our bikes for the race – a process I love, love, love even though it’s a little bit maddening, since it involves both the pleasant routine of getting all my equipment on the bike, but also trying to guess about new ways to pack the bike. Having Ben in the same room was great because the guy knows his business. (Literally: he runs a bike shop.) By 9 p.m. we had everything ready for the start. One more sleep till the race!