By popular request – or at least the request of the person being imitated – here is a photo of Genevieve with “Wob ha-oh,” by which she means hair that looks like Northfielder Rob Hardy’s curly red hair. (I love my girl, but Rob’s hair is much better. I haven’t looked closely enough to compare eyes, but I’ll give the edge to Vivi.) 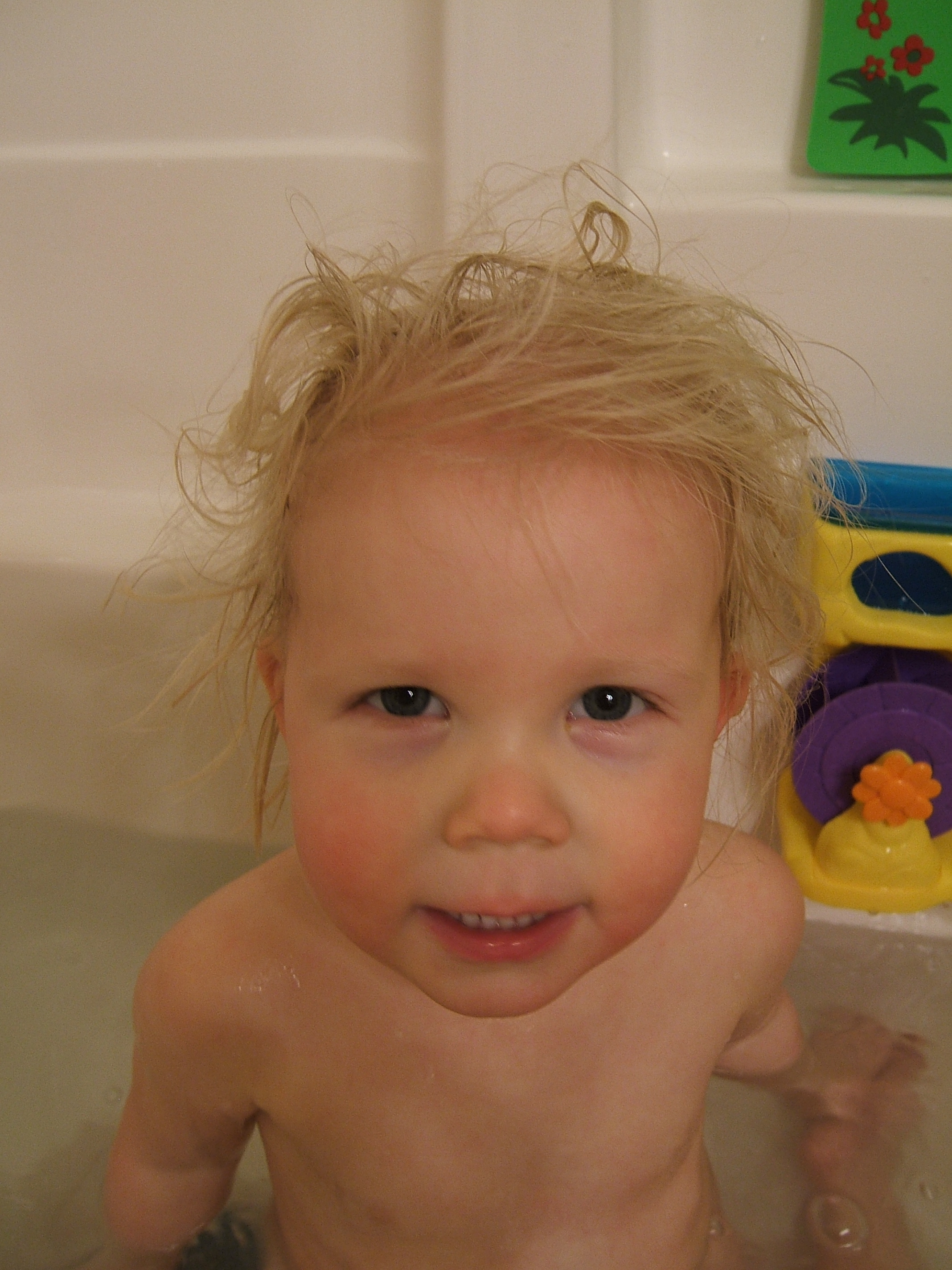 Following a chain of links, I came across the website of Bliz Eyewear, which the almighty internet says is “the leading mid-price eyewear company in Scandinavia.” Nothing remarkable, really, except that all of the company’s shades are named after cities in Michigan, including the two towns where I (mostly) grew up.

Here are the shades named for the town where I went to high school:

Here are shades named for the town where I spend the third through seventh grades:

Though my personal “style” (sneer quotes emphatically required) is probably as far from including aviator sunglasses as any person’s can be, part of me would love to have a pair of shades named for a where I grew up. Plus, then I’d look like Tord Asle Gjerdalen, a Norwegian cross-country ski racer who perversely insists on wearing aviators (perhaps even Bliz!) while everyone else wears crazy sport goggles.

An oldie but a goodie:

Young Democrats from Christopher Tassava on Vimeo.
This was shot in September, on the Sunday of the Defeat of Jesse James Days, but both of these kids look so young to me!

As I head out for an hour’s skiing in the Arb, I’ll enjoy the false certainty of Weather Underground’s forecast for Monday:

The snow that was predicted to fall today finally arrived around noon, and kept up right through dusk. Beautiful, and perhaps a sign that skiable snow is here to stay.

The trees out front of the Carleton library, late this afternoon. 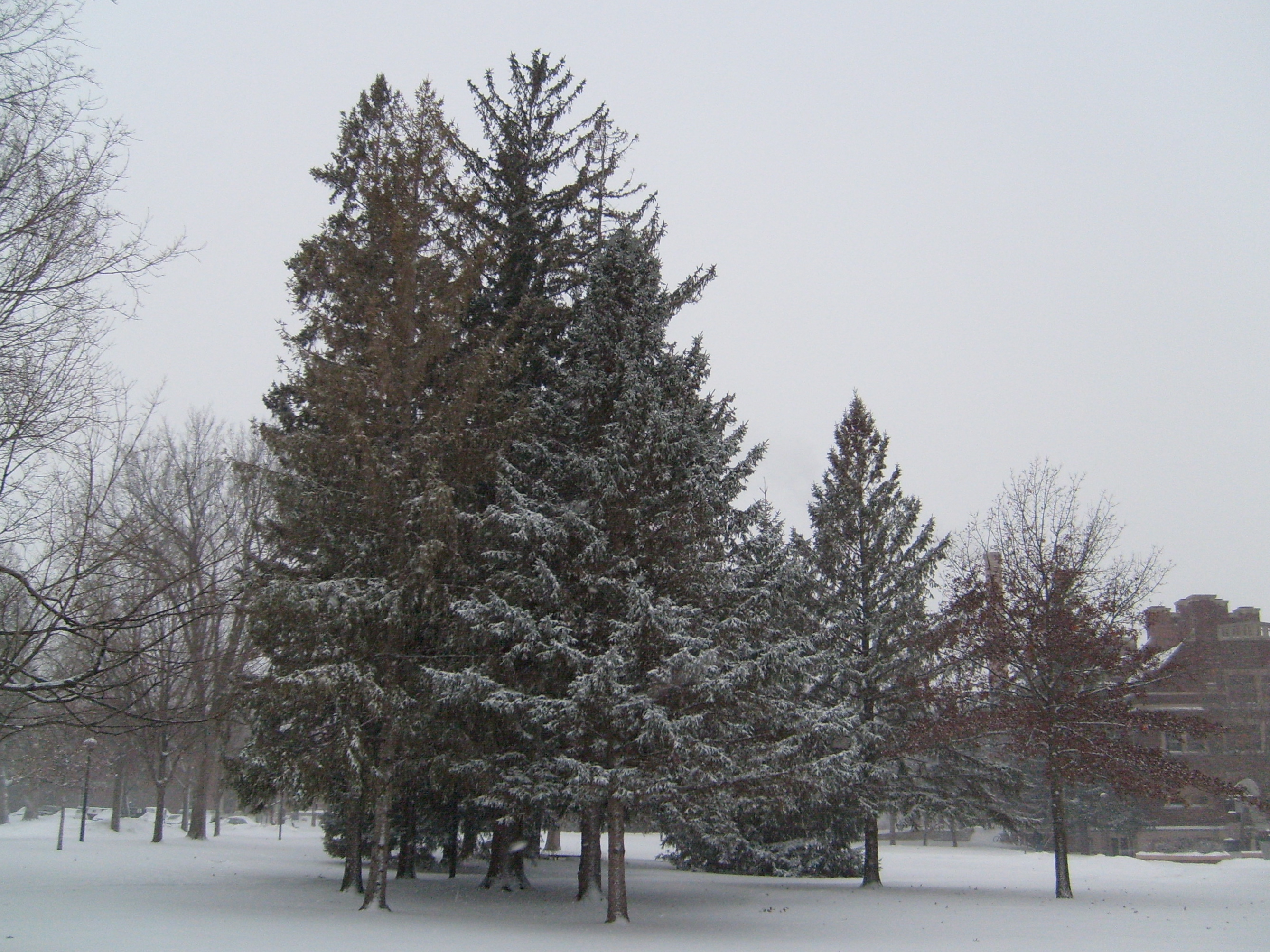 I love pretty much everything the science-fiction novelist William Gibson has written, and there’s no exception for this (seventeen-year-old!) take on “‘Twas the Night Before Christmas,” which spoofs not only that hoary work but also Gibson’s own writing style. Brilliant.

In the night of 12/24/07, though sensors woven through the very fabric of the house had thus far registered a complete absence of sentient bio-activity, I found myself abruptly summoned from a rare, genuine and expensively induced examples of that most priceless of states, sleep.

Even as I hurriedly dressed, I knew that dozens of telepresent armed-response drones would already be sweeping in from the District, skimming mere inches above the chill surface of the Potomac. Vicious tri-lobed aeroforms that they were, they resembled nothing more than the Martian war machines of George Pal’s 1953 epic, “The War of the Worlds”.

And while, from somewhere far above, now, came that sound, that persistent clatter, as though gunships disgorged whole platoons of iron-shod mercenaries, I could only wonder: who? Was it my estranged wife, Lady Betty-Jayne Motel-6 Hyatt, Chief Eco-Trustee of the Free Duchy of Wyoming? Or was it Cleatus “Mainframe” Sinyard himself, President of the United States and Perpetual Chairman of the Concerned Smart People’s Northern Hemisphere CoProsperity Sphere?

“You’re mumbling again, big guy,” said Memory, shivering into hallucinatorily clear focus on the rumpled sheets, her thighs warm and golden against the Royal Stewart flannel. She adjusted the nosecones of her chrome bustier. “Also, you’re on the verge of a major fashion crime.”

I froze, the starched white tails of an Elmore of Shinjuku evening shirt half-tucked into the waistband of a favorite pair of lovingly-mended calfskin jodhpurs. She was right. Pearl buttons scattered like a flock of miniscule flying saucers as I tore myself out of the offending Elmore. I swiftly chose a classic Gap t-shirt and a Ralph Lauren overshirt in shotgun-distressed ochre corduroy. The Gap t’s double-knit liquid crystal began to cycle sluggishly in response to body-heat, displaying crudely animated loops of once-famous televangelists of the previous century, their pallid flanks streaked with the sweat of illicit sexual exertion. Now that literally everything was digital, History and Image were no more than Silly Putty in the hands of anyone with a BFA and a backer in Singapore. But that was just the nature of Postmodernity, and, frankly, it suited me right down to the ground.

“Visitors upstairs, chief,” she reminded me pointlessly, causing me to regret not getting her that last chip-upgrade. “Like on the roof.”

“How many?” And this was Samsung-Sears’s idea of an “expert” system?

“What’s that supposed to mean?”

“That Nintendo-Dow micropore sensor-skin you had ‘em stretch over the Realistislate? After those Columbian bush ninjas from the Slunk Cartel tried to get in through the toilet-ventilators? Well, that stuff’s registering, like, hooves. Tiny ones. Unless this is some kind of major Jersey Devil infestation, I make it eight quadrupeds – plus one definite biped.”

“It can’t be Sinyard then.” I holstered a 3mm Honda and pocketed half a dozen spare ampules of gel. “He’d never come alone.”

“So maybe that’s the good news, but I gotta tell you, this guy weighs in at close to one-forty kilos. And wears size eleven-and-a-half boots. As an expert system, I’d advise you to use the Mossad & Wesson bullpup, the one with the subsonic witness protection nozzles—“ She broke off, as if listening to something only she could hear. “Uh-oh,” she said, “I think he’s coming down the chimney…”

Julia has loved the folk-rocker Dan Zanes for a long, long time. His albums are full of great, complicated songs that happen to be as delightful for kids as for parents. I mean, the man sings (or helps sing) Great Depression ballads so well that Julia begs to hear them again and again, and knows every word. That’s talent.

Many months ago, Julia manifested her fan-ness by drawing a picture for Dan and dictating a note to him. We sent it off, ha ha, and went back to listening to the music. Then, yesterday, we got Dan’s reply – not a form letter, but an illustrated note. Amazing. Fans for life, we are. (Julia was very happy to get the note, but also confused by it, asking repeatedly, “How did he know my name?”)

Making a snowman – or two, identically named “Frosty Most,” after the girls’ two favorite holiday songs, “Frosty the Snowman” and “It’s the Most Wonderful Time of the Year” – is a good way to raise the average of an otherwise ho-hum day. 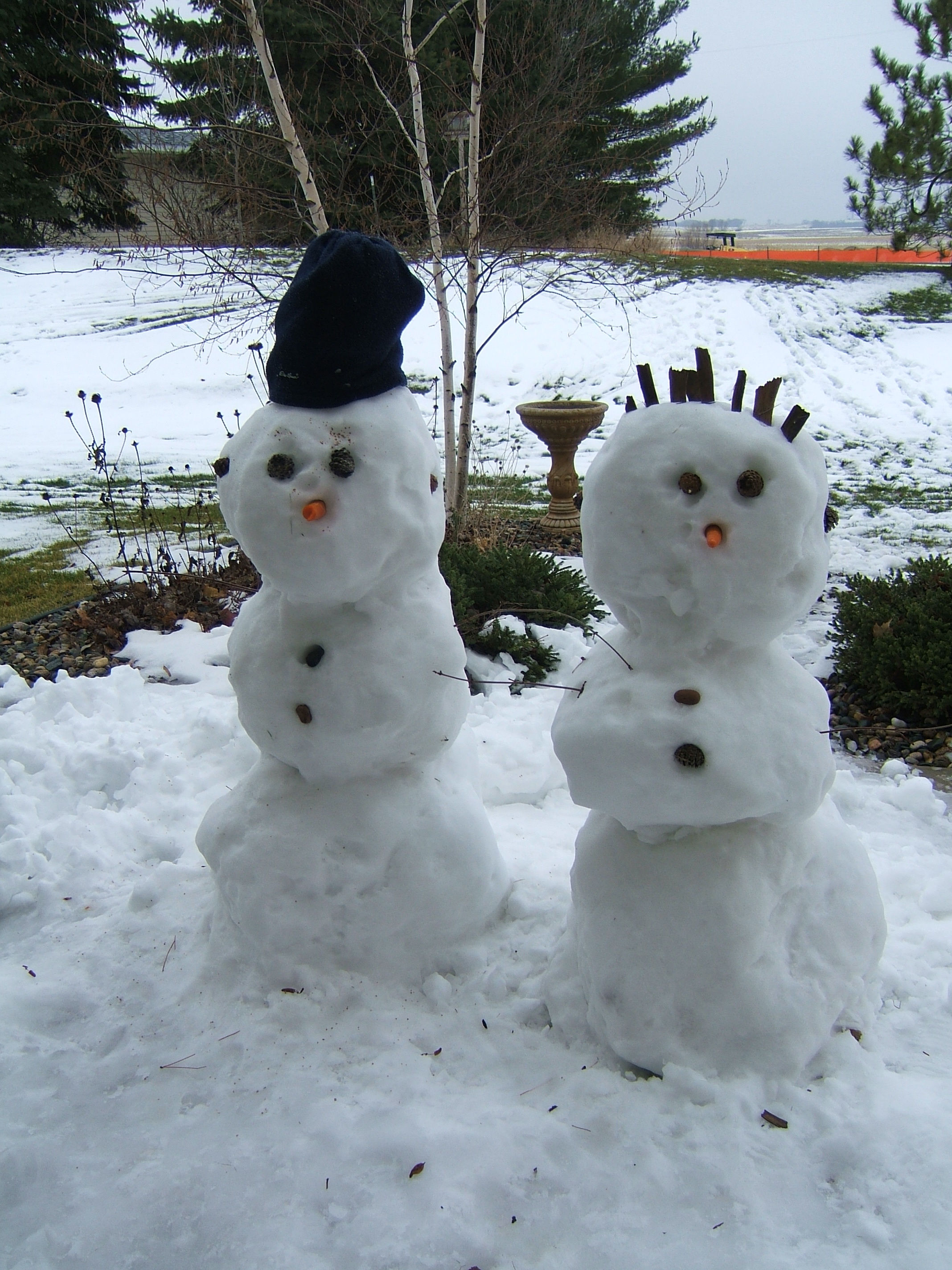 My skis and poles are out on the patio, enjoying the snowfall right now. I’ll be out with ’em tomorrow morning.

From bottom to top and outside to inside, here’s what I wore this morning for the bike ride to work:

By my count, that’s 15 separate items, or 1.33 items for every degree of air temperature when I rode. I almost wish I could say that I didn’t relish putting on all this stuff, but but by god, I did. I am emphatically glad that winter’s (nearly) here.