Steven Rinella’s American Buffalo: In Search of a Lost Icon is excellent look at the natural history of the North American bison, framed by the author’s hunt of a buffalo in Alaska in 2006. As his trek illustrates in gripping, gory detail, the connection between humans and bison has always been complicated. Bison are the oldest kind of meat on the continent, but they have also carried a heavy symbolic weight for centuries, if not millennia – as food, as collections of usable flesh and bone, as holy creatures, as emblems of the West and of America itself. Rinella does a superb job examining all these aspects of the buffalo, and telling a great adventure story, too.

This passage on the buffalo’s extraordinary ability to withstand the cold is maybe my favorite bit in the book: 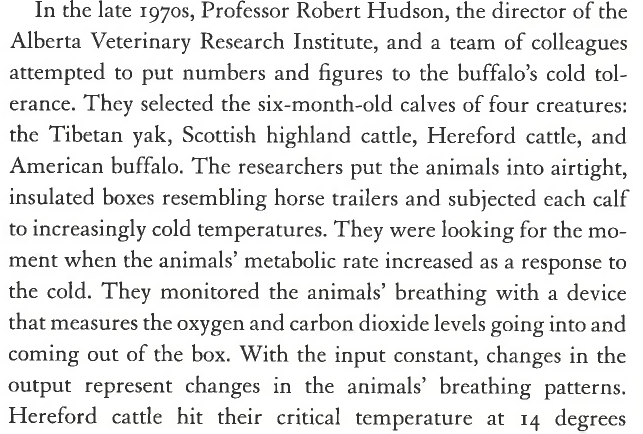 I finished Stephen Ambrose’s Undaunted Courage today, after years of meaning to read the book and months of work at actually reading it. The book is now a classic piece of American history, the best popular look at the Lewis & Clark expedition from St. Louis to the Pacific Coast in 1803-1806.

Though I could quibble with various aspects of Ambrose’s treatment of the history of the expedition*, overall I found the book to be a superb piece of history. Ambrose’s writing is clear and occasionally beautiful, he does a great job of mining the explorers’ journals and other primary sources, and above all he effectively conveys the terror and wonder of the expedition into lands that were unknown to Americans.

A few aspects of the expedition really stood out to me:
+ The colossal scale and reach of the Missouri River, which dwarfs the Mississippi in every way. (Why do we even care about the Mississippi again?)
+ The variety and number of the Natives along the expedition’s route. "Tribes" is such a misnomer. If the Native peoples were not nation states, they were at least nations.
+ The incredible, already diminishing complexity of natural life on the plains and in the mountains.
+ The difficulty of getting anywhere when the fastest mode of transportation was a horse or a sailing boat.
+ The naïveté of Americans’ views about their influence on the European colonial powers and Native nations. The reach of American foreign policy has exceeded its grasp at least since Jefferson.
+ The majesty and obduracy of the western mountains.

I pushed to finish the book now because some of my drive later this week will follow the explorers’ route west and see some of the mountains they saw. It’ll be cool to see things they saw, more than 200 years ago.

My ridiculously well-read friend Julia recommended that I read Fire Season, a book-length essay by Philip Connors on his work as a fire-tower lookout in the mountain forests of New Mexico. Connors’ writing is amazing, evoking both the wildness of his setting (which I now have a deep desire to see firsthand) and the civilized nature of his work, which aims, at its base, to preserve what man values in nature. I loved lines like

Time spent being a lookout isn’t spent at all. Every day in a lookout is a day not subtracted from the sum of one’s life.

which seems as true for my favorite outdoor activity (riding bikes!) as it does for being a lookout.

Connors’ skills at crafting prose are matched by his skills at explaining the American perspectives on fire and on wilderness. Much of the book concerns how the U.S. Forest Service – Connors’ employer – has understood the primordial force of wildfire, and how it has reacted to it. The historical material is fascinating on its own (someone seriously proposed clear cutting the Rockies to prevent fires!) and as context for Connors’ own stints in the watchtower. Not all of the fires he spots garner a response from the Forest Service: some are left to burn acres and miles of forest, contributing to the endless natural cycle of burning and growth.

But Connors also adds his voice to the conversation about what wilderness is, and what it’s for. He comes down in favor of preserving wilderness for its own sake: not as a place for humans to “recharge” but as a place apart from humans and, I thought by the end of the book, better than we are.