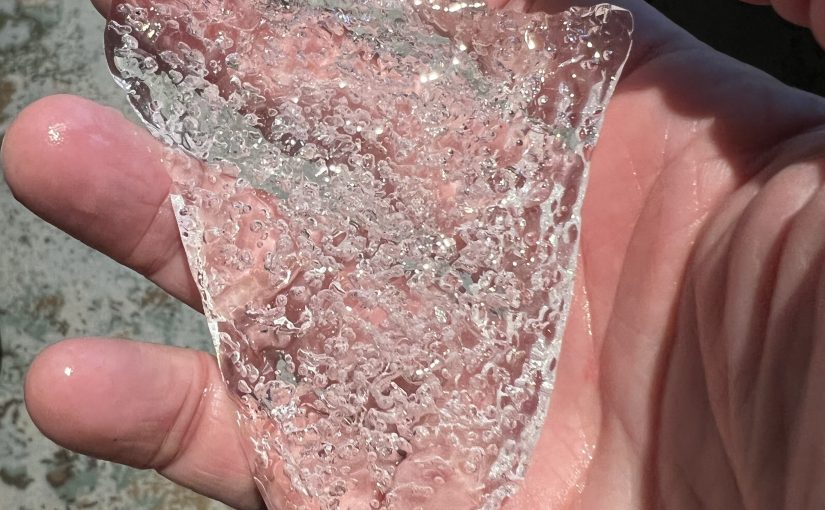 Today, Northfield had an incredible hailstorm that transformed town into nothing I’ve ever seen before:

You won’t be surprised to hear that This Reminded Me of Antarctica – specifically, of an amazing small-boat cruise on February 4 though the ice floes that choked the French Passage. I’ll write in more depth about that unreal experience soon, but the particular aspect of this day that reminded that day was the ice. Most of the hailstones were white, but some were clear, including some of the biggest ones. (I sure wish I’d taken a few photos of those marble-sized, perfectly clear stones.)

Clear iceberg ice is very old; the weight of the snow and ice over centuries or millennia has pressed all the air out of the ice, leaving only transparent frozen water like this hunk that I brought back with me from the French Passage cruise. I just leaned out of our rubber boat, barehanded, and scooped out a piece of ice – the size of a soccer ball, heavy like stone, clear except for the remaining bubbles. I sure wish I’d taken a few photos of that big old piece of ice. Here it is about twelve hours later:

It looked a lot like this bigger chunk that some of the Russian passengers pulled out of the French Passage and used that afternoon as a vodka “luge.”

My response to the Russians’ invitation to try the vodka luge was well documented (a possible topic for another post), but I only took one photo of how I wound up using my personal chunk of ice. I set the original chunk in a bowl after we got back from the cruise around noon, then around midnight poured the meltwater and remaining ice into a wineglass. Ferociously cold, amazingly delicious.