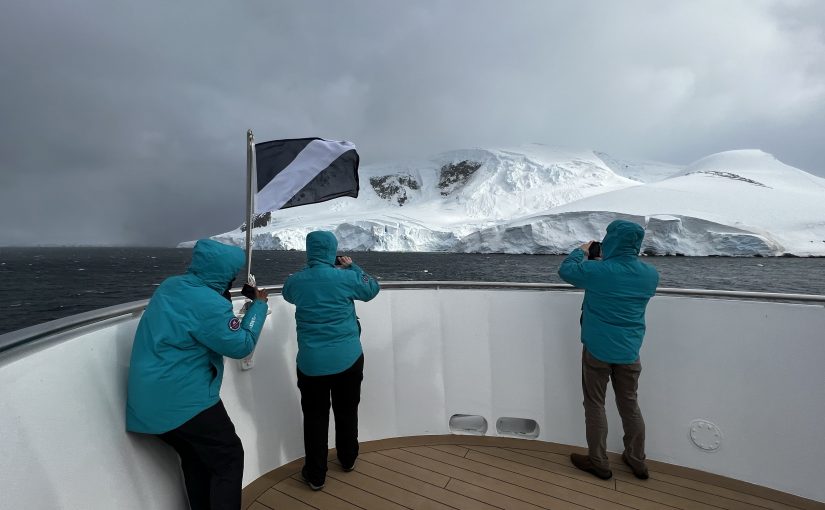 Our ship, SH Minerva, was pretty spectacular inside and out. The interior spaces, from the public areas to my cabin, were wonderfully comfortable, but I really enjoyed the outdoor spaces, which encouraged everyone to spend as much time in the open as possible – whether together for meals or birdwatching or alone to simply contemplate the ocean and the mountains.

Of the several great outdoor spaces, the most spectacular places was the “Swan’s Nest,” a lookout at the very tip of the prow, a spot from which every inch of the ship was behind you and the only thing in front and below was the ocean.

I spent every moment I could in the Swan’s Nest. Between the wind, the waves, and the birds, the spot was a very loud place to be.

Most everyone else on Minerva enjoyed the spot too.

I’d planned to spend as much time in the Swan’s Nest as possible as we sailed back through the Beagle Channel to Ushuaia at the end of our cruise, but alas: I was confined to quarters by COVID. The best I could do – and it was pretty good – was to watch the live feed on the camera aimed down off the bridge over the Swan’s Nest. I drank the last of the previous night’s wine while we sailed back to port.

Enjoying the view virtually, as it were, was nice, but I’ll never forget being crowded with other passengers into the Swan’s Nest early on the morning of February 4 as the captain nosed Minerva into the Lemaire Channel. What a spectacular spot to watch those headlands come toward us.

We wound up not going through the channel that morning, but the Swan’s Nest was still the best place on the ship to watch channel pass that afternoon – a topic for another post.