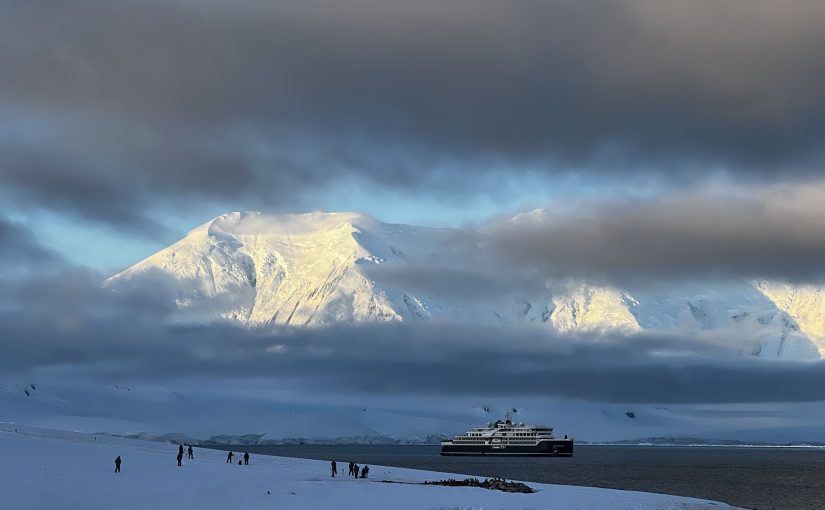 We saw the British base and Norwegian whaling station at Deception Island on our first proper day in Antarctica. On our next-to-last day, we saw another, far more pleasant and even prosaic sign of man’s encounter with Antarctica: the British and Argentine “huts” at Damoy Point on Wiencke Island. What a place – unreal in that quintessentially Antarctic sense: snow, ice, ocean, mountains, clouds, sky… And of course seals and penguins.

The gentoo penguin colony was small

and, in the soft evening light, quite active. Many of the adults were tirelessly marching back and forth to collect more rocks for their nests.

On the long walking path between the landing beach and the huts themselves, a couple seals and a couple skuas were lounging, unperturbed by the parka’d pax going back and forth.

The huts themselves were tiny and charmingly rustic. The British hut was open to visitors and preserved more or less the way it had looked in the 1990s, when the Brits stopped using it as a station for scientific research and a base for supplying other nearby stations, like Port Lockroy (just a few kilometers over the ridge).

A sign at the door said, in essence, please clean your boots before coming in, please don’t disturb or take anything, and please close the door when you leave. So small and crowded was it that I couldn’t get a good angle for photos, but it looked and smelled like just about every backwoods cabin you might’ve seen. Except, no woods outside. I could imagine spending months there quite happily, hiking over the snowfields all day and hiding from the weather as needed.

The even smaller Argentine hut wasn’t open for visitors (perhaps because it’s actually still in use?), but honestly they have a superior hut-decoration scheme. Nothing really beats los albicelestes, even battered by the weather.

Nothing except maybe the wider, wilder landscape itself. Dorian Bay was a good reminder of just how small and insignificant humans are and should be.