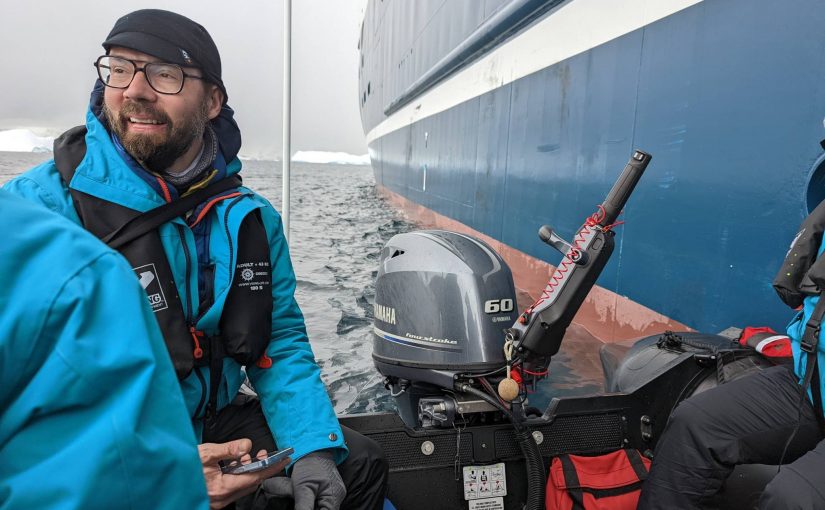 Cycling and loving winter has given me a deep appreciation for good gear. As addictions go it’s probably less destructive but not much less expensive than drinking, drugs, or gambling. And it gives me the chance to smugly tell people, “There’s no bad weather, only bad clothing.” If I could say this in Norwegian, like some Northfielders can (and do), I’d probably collapse into a smug black hole.

I was thus both pretty lucky to have a lot of the “right” stuff for the Antarctic cruise (the value of wool baselayers cannot be overstated!) and somewhat dubious that I really needed the heavy-weather parka that the cruise line provided to everyone. Wouldn’t one of my weatherproof winter jackets suffice? I generously, landlubbingly decided to grant them the benefit of the doubt. At worst I’d get a sweet new jacket; at best I’d get a sweet new jacket that kept me dry and warm in Antarctica.

Well, it turns out those folks knew what they were talking about! The parka was incredibly effective at keeping me dry and warm while standing or sitting in some pretty bad great conditions: sideways rain, pelting sleet, 70-mph winds, snow flurries… Who knew? Besides, I mean, everyone who’s ever gone to Antarctica, been on the ocean, etc. The fabric was great, but the super-snug and easy-to-use hood was fantastic, the snap cuffs were marvelous, and the numerous well-designed pockets were wonderfully useful for phones, gloves, hats, hands…

As for the blue of the jacket? Pretty much the same color as old ice!

While we passengers were able to bring our parkas home with us, we could not keep two other cool bits of gear. Each time we went ashore, we wore insanely great insulated and waterproof Muck boots instead of regular boots. The guides specifically warned us not to bring, much less wear, any landlubbing boots (hiking boots, Sorels, etc.), saying that no matter how good you think they’ll work, they won’t work well in Antarctica. The knee-high Mucks, like the parka, were a revelation. Not only did they provide exceptional traction on snow, ice, wet rocks, and penguin shit, they were completely waterproof and amazingly warm, thanks to the liner and to wool socks. Because of course I did, I tested my boots (size EUR 48 – big clodhoppers) on one of our landings by standing for about ten minutes in shin-deep water that was about 30º F and chock full of ice chunks. Toasty warm! If I had the sort of life that involved frequent splashing in near-frozen water, I’d get a pair.

This last bit of guidance caused several passengers at the orientation to reflexively reach for the inflation tab, which in turn caused the guides to shout good-naturedly, “Do not pull the tab!” Relatedly:

The full kit – complemented here with a wool cycling cap from Minnesota’s 45NRTH (one of my very most favorite items of clothing) and by fleece-lined and water-resistant pants from Eddie Bauer (same) – was something to behold! Almost drowned out the dorky grin on our first landing.