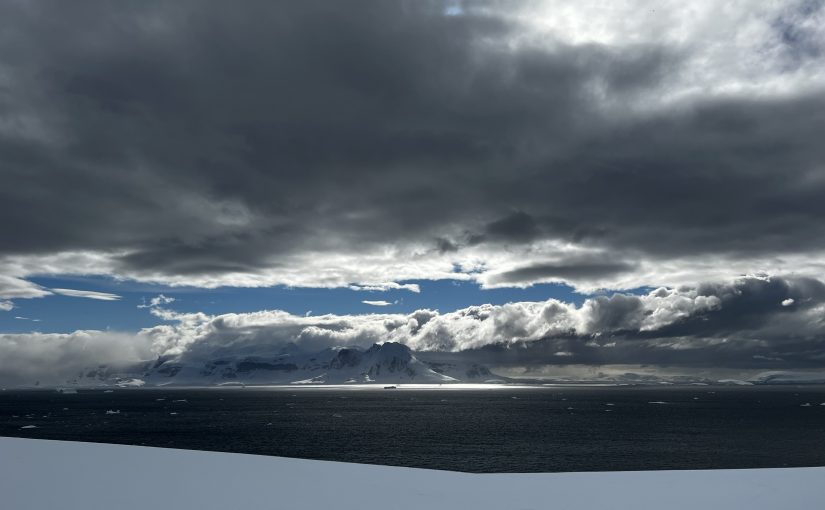 The day after we visited Deception Island, we landed at Orne Harbor, a gorgeous inlet on the Antarctic Peninsula proper – our first (and only) landing on Antarctica the continent.

Our geologist guide Mary Savina half-jokingly pointed out that the notion of a “continental landing” is a kind of fiction that’s only true or not true because of the particular moment in geological time at which we visited. A few hundred or thousand years later in either direction, and maybe an island would be connected by land to the continent, or this bit of “the continent” would be an island. Point taken, Mary, but I stil enjoyed the thrill of being on Antarctica.

Orne Harbor was a spectacular place. The view down into the harbor, with Minerva anchored and waiting for us to come back aboard. I mean, good god: the ship! the water! the mountains! (Notice the tiny rubber boats heading back to the ship…)

But the literal and personal high point of the continental landing was the snowy, winding climb up a steep bluff to a narrow, wind-blasted saddle

that offered some glimpses of chinstrap penguins who were somehow ensconced in a rock outcrop hundreds of meters above the ocean.

From there, we could look south into the continent

And west out onto the Gerlache Strait, named for the borderline-insane Belgian explorer who was led (or mis-led) the first crew of sailors that overwintered in the Antarctic, not far from Orne Harbor.

Despite the 60-knot (70 mph) winds that howled off the ocean at us, I drank in that vista, which was the best I’d seen to that point in the cruise. The seething gray clouds. The stabs of sunlight. The distant snowpeaks. The deep blue ocean. The plunging white bluff (carefully monitored by one of our guides, who was determined to make sure none of us went too close). The icebergs. And amidst them all, reminding us that the world still existed, a Russian oligarch’s private yacht, steaming north…

After a long – but not long enough – time on the saddle, looking every which way and getting deliciously chilled

I finally decided to descend the bluff and return to Minerva. As I turned away, I spotted a lone chinstrap making its way from the rookery up and over a ridge and then, presumably, down to the water to feed on krill and fish that it would bring back up to its chick. The bird looked lonely as it wobbled alone along a path that it and others must have taken many times a day, indifferent to the blue-jacketed primates who were coming and going, but mostly going.