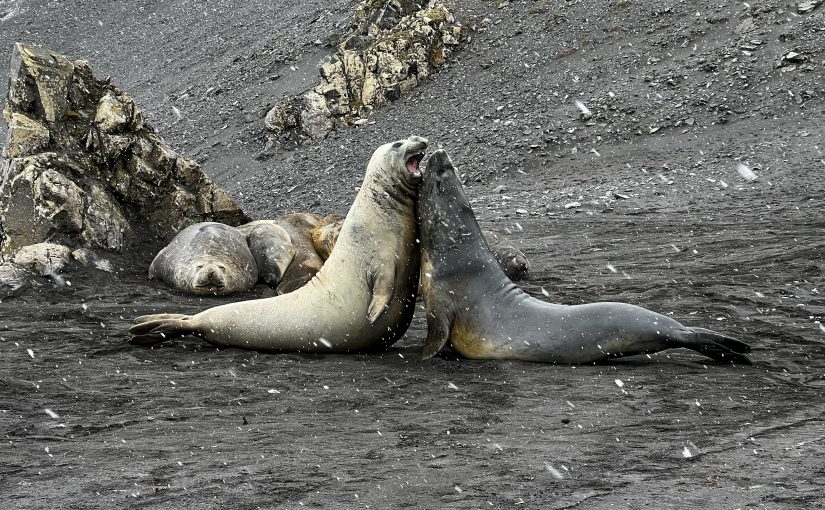 I’ve been back from Antarctica now for almost seven weeks. The Buenos Aires-Antarctic Peninsula-Ushuaia trip was the longest trip I’ve ever taken, and – with the places, the animals, the quarantine – certainly the weirdest. I still can’t always remember whether I was just yesterday studying icebergs from Minerva or watching penguins or running away from seals or hiking in Tierra del Fuego – or conversely whether I just dreamt the whole amazing experience.

So to try to make some sense of the trip, I’m going to try to post some photos and a short essay (a long caption, really) each day this month. This first post is on our very first landing, exactly two months ago today, on the morning of February 1. We put ashore at Walker Bay on Livingston Island in the South Shetland archipelago, just northwest of the tip of the Antarctic Peninsula. Livingston was “the first land discovered south of 60° south latitude in 1819.”

The island was like no place ever seen before: rugged snow-covered volcanic bluffs that looked black but resolved into a palette of blacks, grays, and browns;

a few penguins wandering to and from the colony on Hannah Point (where we were forbidden to go;

and seals. We saw a leopard or two, a few Weddells, and many elephant seals, a surprising main attraction. Massive. (As big by weight if not volume as Asian elephants – the pachydermal kind.) Colorful in an understated Antarctic way. Slow moving, ridiculous looking, yet somehow dangerous seeming too.

I’d never seen anything like these beasts except maybe bison on the plains. I was riveted, especially by two juvenile males that were practicing the fighting they’d need to do later in life to secure mates.