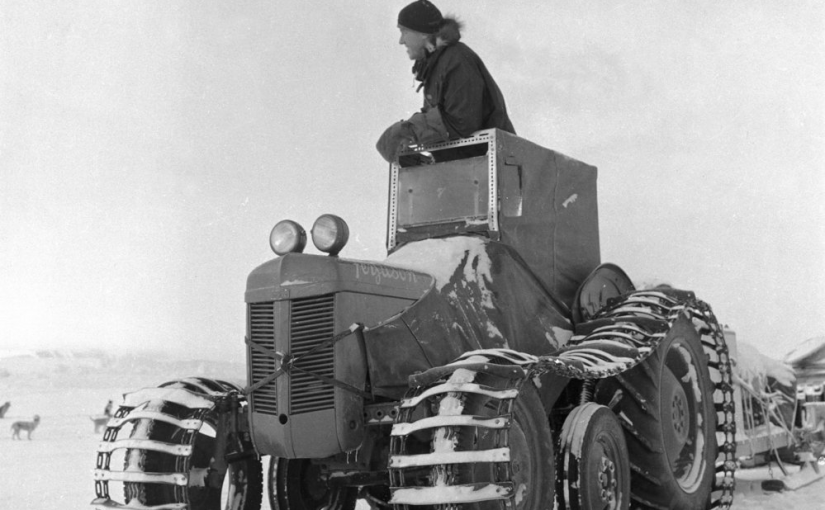 Roald Amundsen won the race to the pole on December 14, 1911, reaching that blank, featureless spot with four other men.

Five weeks later, on January 17, 1912, Robert Falcon Scott and four others also reached the pole, discovering Amundsen’s tent and flags as well as a letter to him. They had lost the race, and they lost their lives on the way back.

So who reached the pole next? It depends. But what’s striking about subsequent efforts to reach 90º S was how much later they occurred. Amundsen and Scott did not open a highway to the pole. Rather, they emptied the journey of any meaning.

Only in 1929 did more humans reach the pole: the American Admiral Richard Byrd and a copilot flew over the pole on November 29, 1929. Byrd did did not land at 90º S, so it’s hard to say that – compared to Amundsen or Scott – he even “reached” the pole. The flyover was almost ludicrously American: dependent on on technology, mostly devoid of value except as spectacle, and unreal – they “reached” the pole in the same sense than someone with a layover in a city’s airport can be said to have been to that city. The overflight was also a sequel to Byrd’s apparent flight over the North Pole in 1926, an achievement which has been doubted ever since.

So cross Byrd off the list of those who reached the pole. Next? In October 1956, American rear admiral George Dufek one-upped his former and then-current commander Byrd by actually landing an airplane at the South Pole. Dufek and his six crew members thus became the first Americans to stand at the pole, and humans 11 through 16 to get there.

Dufek’s flight was part of “Operation Deep Freeze,” an huge effort – a campaign, really – to use scientific inquiry as the front for establishing an American military presence in Antarctica. While the possibility of a militarized Antarctica was prevented by the Antarctic Treaty in 1959 (see my post “A continent with no countries”), Deep Freeze and its successor operations did make the United States the key agent of exploration and science in Antarctica after mid-century – a position that has endured till today. Interestingly, that quintessential American Walt Disney was an honorary participant in Deep Freeze, having designed the operation’s official patch and sent employees to Antarctica to film the expedition.

So: Amundsen’s and Scott make “manhauling” expeditions on foot in 1911-1912. 18 years pass, then Peary makes his overflight in 1929. 27 more years pass before Dufek flies to and lands at the pole in 1956. Finally, in January 1958, during the International Geophysical Year that led directly to the Antarctic Treaty, another expedition – the Commonwealth Trans-Antarctic Expedition – reaches the pole by an honest overland route.

And who led this third, or fourth, or fifth effort to get to the pole? None other then Sir Edmund Hillary, who had with Tenzing Norgay had been the first to the top of Everest/Chomolungma in 1953. Among other innovative aspects to his effort, Hillary drove specially modified tractors to the pole, and used airplanes to both resupply his team and reconnoiter for it.

And – in an amazing echo of the race between Amundsen and Scott almost a half century earlier – Hillary defied, or at least ignored, orders from his expedition’s commander, the Briton Vivian Fuchs, to stop before actually reaching the pole, presumably so Fuchs and his team, coming from the other direction across the continent, could be third/fourth/fifth to the pole. Regardless, Hillary got to the South Pole on January 3, 1958, just over two weeks before Fuchs arrived. The pole then was not the barren spot in the ice that it had been in 1911: in November 1956, as part of Operation Deep Freeze, the U.S. had flown in men and supplies to establish the Amundsen-Scott Station at 90º S.

Fittingly, Hillary did not drive his tractors back to the coast along Fuch’s track. No, he hopped on an American plane and flew out.