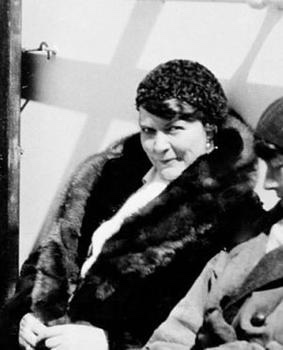 So if Amundsen and his three men were the first men to the South Pole, who was the first woman? It took 58 years after the Norwegians, but… it was a six-way tie.

The excellent Wikipedia article on women in Antarctica points out that the continent was, in a very real sense, an extraordinarily male space until fairly recently:

Antarctica was seen by many men as a place where men could imagine themselves heroic conquerors. In Western culture, frontier territories are often associated with masculinity. Antarctica itself was envisioned by many male explorers as a “virginal woman” or “monstrous feminine body” to be conquered by men. Women were often “invoked in terms of place naming and territorial conquest and later even encouraged to have babies in Antarctica.”

The first woman known to have visited the continent was Norwegian Ingrid Christensen, who set foot on the mainland in 1937. Tell me she doesn’t look like the sort of person who would have gone right to the pole if she’d had enough biscuits and tinned beef.

Not till 1969 did women actually visit the South Pole. An international group of scientists, led by Lois Jones, a geologist from Ohio State, interrupted their research elsewhere on the continent to fly to the South Pole for what was basically a tourist jaunt:

Still, first! Honestly, I’m a bit surprised both that the first visit by women took until 1969, and that the Soviets didn’t do it as a sort of Valentina Tereshkova effort to prove the supremacy of socialism. I guess they were too busy measuring temps at Vostok.

The Chileans and Argentines had a different approach to female firsts on the continent:

Using women as territorial conquest is probably at its most literal in the way that Argentina and Chile have flown pregnant women to Antarctica to give birth and stake a national claim to the area. Silvia Morella de Palma was the first woman to give birth in Antarctica, delivering Emilio Palma at the Argentine Esperanza base 7 January 1978.

Madre y bebe Palma are probably still kicking around Argentina. I should look them up!