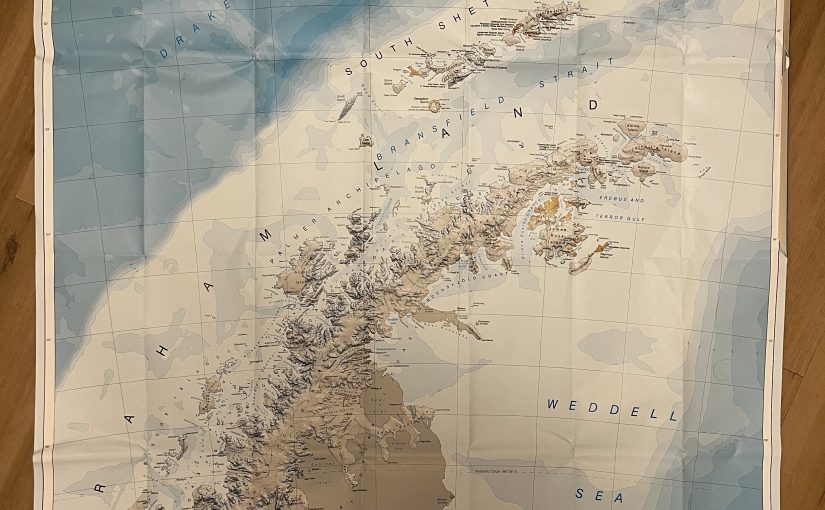 I have always loved maps. I have several laminated maps that I keep around as motivation to train for my winter bike races, and I like to buy one or two (let’s say) both to plan for trips and to remember the trips. I spend way too much time studying the maps generated by fitness-tracker apps of bike rides I just took, and even more time poring over Google Earth maps of places I’ll never visit.

I’ve spent quite a bit of time, then, finding good maps of Antarctica and now studying the couple that I’ve bought (so far):

The “Antarctic Explorer” map covers all of the continent on one side and the Antarctic Peninsula on the other, and offers a lot of interesting historical information on Antarctic explorers too. The other map, made by the British Antarctic Survey and “dispatched by post” from Stanfords London (“the world’s biggest map shop,” which, yes please!) focuses entirely on the peninsula and on its northernmost tip, a.k.a. Graham Land,

which was named for the Lord of the Admiralty who dispatched an early British expeditions to Antarctica in the 1830s. Sailors on that venture were probably the first humans to actually see the continent, rather than just infer its existence from wind, ice, and currents or to spot some of the many, many islands offshore. Ice ho!

As you can see in this video, Graham Land is as much water and island as continent. Our expedition’s ship (which, by the way, is not exactly a tramp steamer!) is going to thread its way through all these islands on the west side of the peninsula to about 65º south latitude.

The name “Graham Land” strikes me as old fashioned in a charming, goofy way, but mostly harmless since it doesn’t, you know, erase the name(s) that an indigenous people used for the place. (I want to say more about Antarctica’s humanlessness in a future post.)

Argentina and Chile – the countries nearest Graham Land – beg to differ with the name, por favor. The Argentines call whole peninsula Tierra de San Martín, after the general who established Argentina, Chile, and Peru as independent from Spain (at exactly the same time Lord Graham was lording in London). The Argentines call Graham Land the Península Trinidad or Tierra de la Trinidad (Peninsula or Land of the Trinity).

Despite Argentine’s appeal to the heavens, Chile totally wins the toponym debate by applying the name Tierra de O’Higgins to the entire peninsula. The wonderfully named Bernardo O’Higgins was the Chilean leader who worked with General San Martín to free Chile and who then served as its first ruler, the “supreme director. Honestly, forget Antarctica – someone should name whiskeys after this guy. I would totally drink a glass of O’Higgins or Supreme Director.

I should probably pencil those alternative names onto my maps, no?