I have three sleeps till my sixth try at the Arrowhead Ultra, which starts at 7 a.m. on Monday, January 28, in International Falls, Minnesota. As I write this on Friday afternoon, the forecast calls for some classic Arrowhead conditions: temperatures at the start of about -25º F, at midafternoon of about -5º, and of -25º overnight – by which time I hope to have earned my sixth Arrowhead finish. Again this year, many (but not all) of the racers can be followed online through Trackleaders.

So, yeah, the weather will be the dominant story this year, as it was last year when the forecast was about 20º too high. I adjusted to the cold pretty well but made two big mistakes – taking a wrong turn just after the halfway point, and then mishandling a flat tire in the middle of the night – that forced me to spend more time on the course and gave me a pretty good case of frostbite. Turns out, spending 90 minutes handling metal at 2 a.m. and -30º isn’t a safe thing to do.

In aiming to finish this year in under 24 hours, I’ve made a few changes from last year. First and foremost, I’m not going to race in the unsupported category, which means that – unlike last year and the year before – I can use the checkpoints to rest, eat and drink, and warm up. I don’t want to spend more than a total of an hour in the checkpoints. A little less self-reliance means I’ll be a little faster than last year, which was my slowest year on the course since my first race in 2014 (another super-cold year). I aim to spend no time at the first checkpoint, around mile 30, and as little as possible at the checkpoint at mile 60 (just enough time to eat a grilled cheese sandwich and down some Coke), then to rest better at the third checkpoint near mile 100 before making the push to the finish.

I would love to set a new PR of less than 19:30, but I’m not sure I have the fitness for that pace, or that the conditions will allow it. Tuscobia went well, to be sure, and St. Croix went even better, but those two events are a far cry from Arrowhead! Who knows, though. The trail will bring whatever it brings.

Beyond racing in the supported category this year, I’ll be on a different bike this year, the Blue Buffalo, a Salsa Mukluk XO1 that has treated me very well in three races so far.

The bike is a “one-by,” with 12 gears in back but no front derailleur, and it’s the most comfortable bike I’ve ever had, as well as probably the lightest slash fastest. Carbon from the HED Big Deal rims to the Whisky handlebars! I’m running 45NRTH Dillinger 5 tires (studded in front, bare in back), set up tubeless to save a little weight. D5s aren’t state of the art any more, but I love them and don’t want to change to something else right now. Under its first owner, Ben Doom, this bike finished second at Arrowhead last year, so it knows the course. As Ben said, “Put it on cruise control and relax.”

The Blue Buffalo is set up with racks and bags to carry all the stuff that we must or want to take with us on the trails: fork and rear racks by Salsa (Anything Cages and the Alternator rack, respectively); a front bag from Yeti; a frame and top tube bag by Cedaero in Two Harbors, Minnesota; and handlebar bags and a seatpost bag from Revelate in Alaska, which also made the all-important pogies that I’m using on my handlebars. The biggest change I’ve made this year is using the rear rack to carry my sleep system: a -20º F bag, bivy sack, and pad. Having all that weight and bulk off the front of the bike made the rig a lot more manageable at Tuscobia and St. Croix, and I’m hoping for a similar payoff on the relentless hills at Arrowhead. Here’s the Blue Buffalo before the St. Croix race a couple weeks ago, set up for the race except for the pogies (which weren’t needed because it was fairly warm). 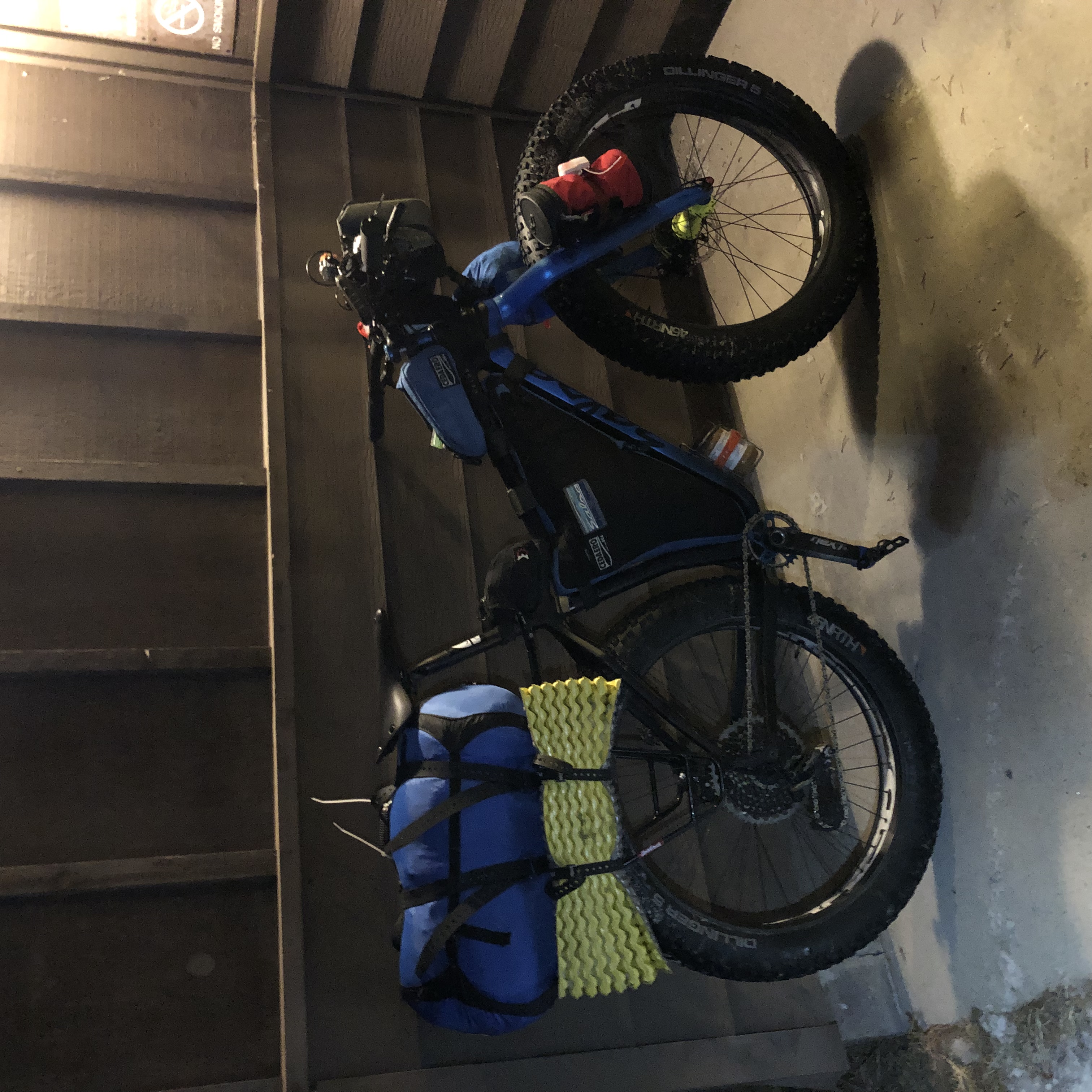 All of these bags have served me well in many races and rides, so I trust them to carry my food, spare clothes, batteries, stove (the classic MSR WhisperLite), fuel, medicine, hand warmers, pump and repair kit, etc. Below is some of the core gear that I carry in every race, including required stuff, plus some of the food I’ll carry in the Arrowhead and my helmet and boots – and the Spot beacon that will transmit my location to Trackleaders. 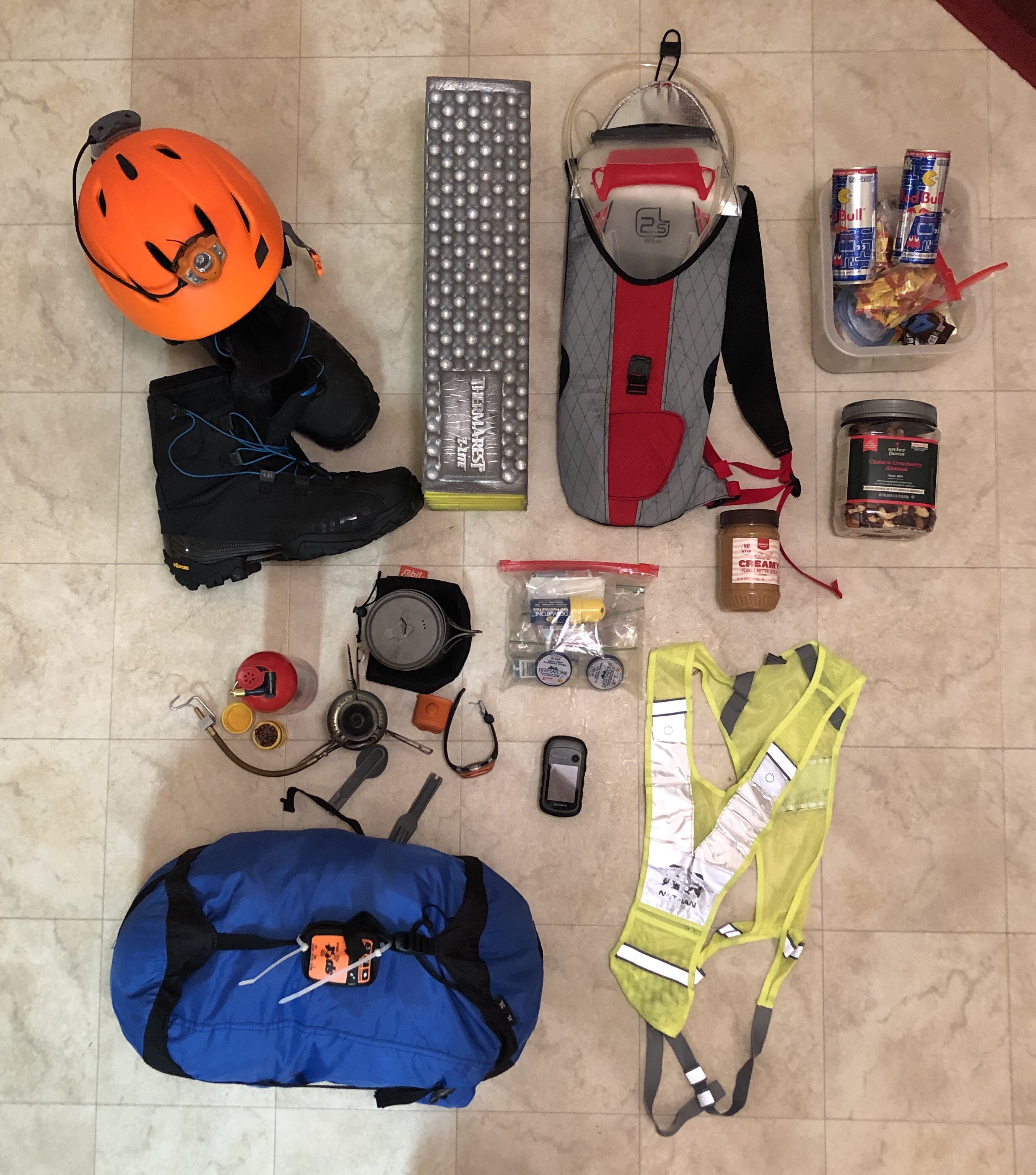 I’m carrying over almost all of the kit and gear I’ve used over the last few year. From bottom to top, I’ll be wearing 45NRTH Wolfgar boots over a thick pair of wool socks and a thin pair of compression socks; Sugoi Titan pants over my heaviest Craft baselayer tights and a pair of lightweight but padded cycling shorts; and my beloved Eddie Bauer Ascent softshell jacket over a wicking Craft tank top and a Craft long-sleeve thermal top. (I’ll have a reflective vest on top off all that – a requirement for these races. 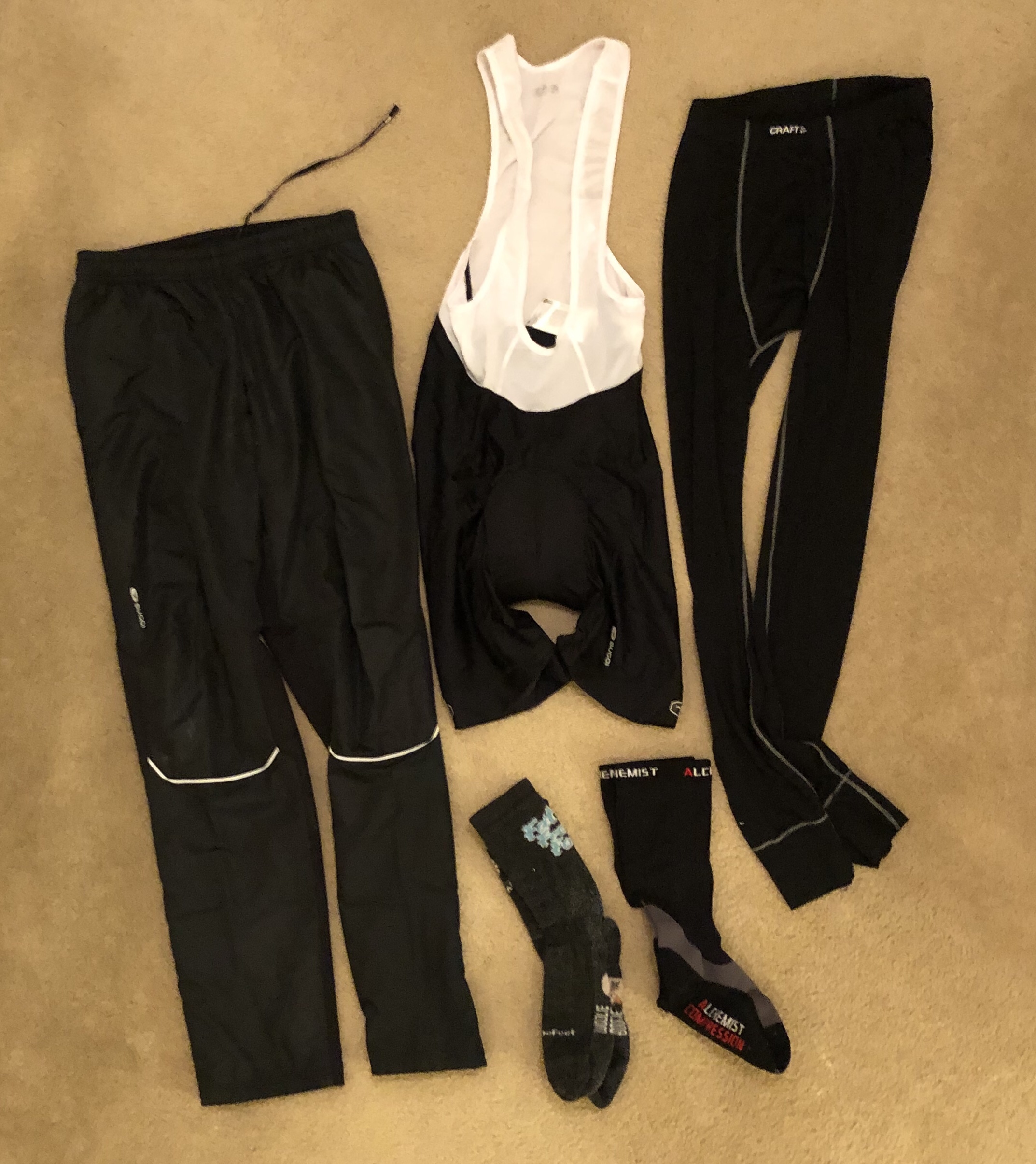 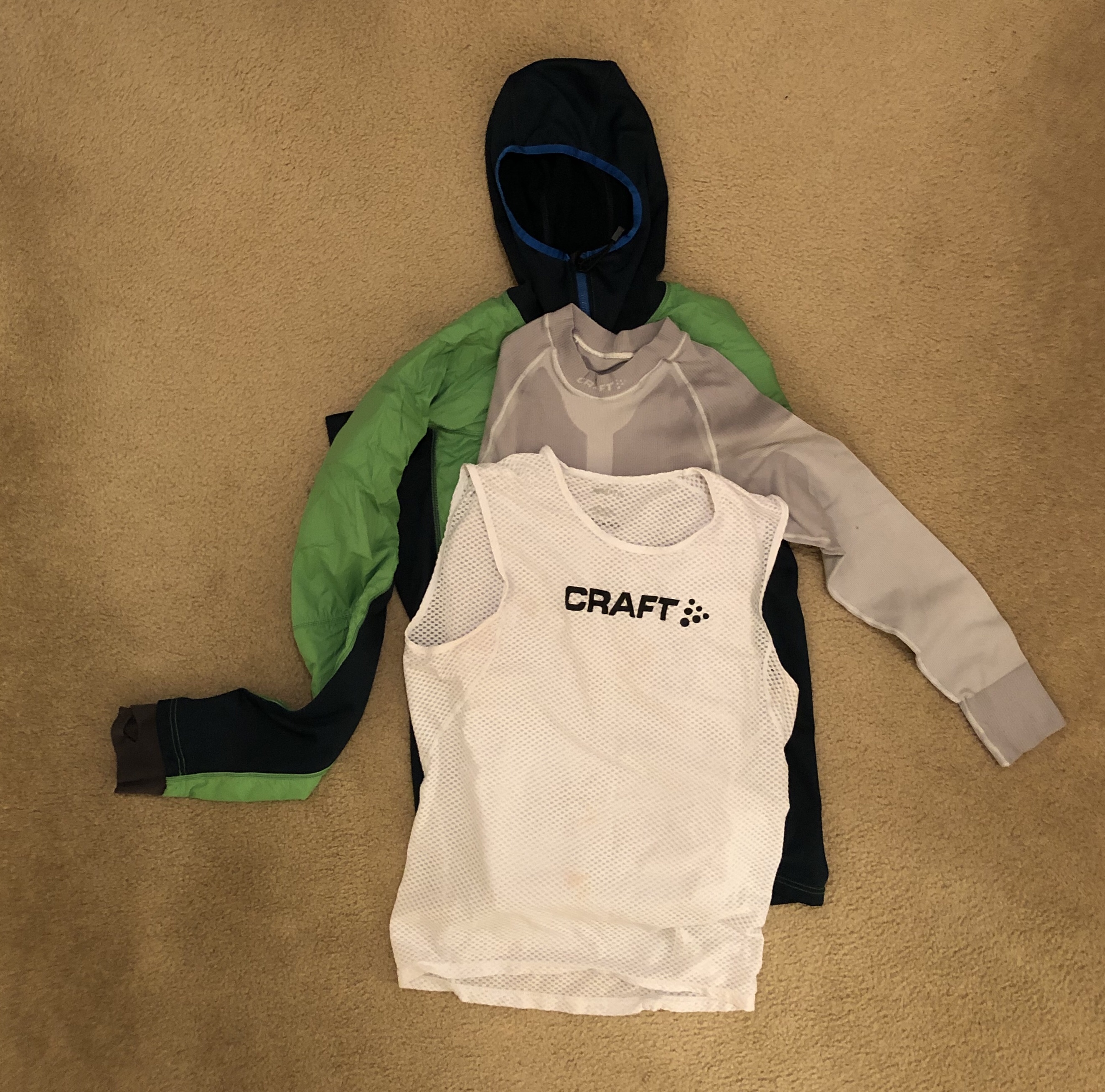 As needed I can add layers on top of the jacket: a thin windvest, a light fleece vest, a thin puffer jacket, or a thick puffer. I’m going overboard – “packing my fears” – with all those extra layers, but as temperatures dip overnight, I’ll probably pull on the lighter jacket for the extra security and the warmth. I expect to walk many of the hills in that stretch of the race.

Those safety layers are a reaction to getting frostbit last year. For that same reason, I’m over-preparing with handwear. I plan to wear my midweight Outdoor Research PL400 gloves on my hands at all times, and besides the warmth of the pogies, I am bringing three set of reinforcements: thin OR gloves to put inside the gloves, OR mittens for outside the gloves, and a pair of down mittens from Black Rock Gear. Based on experiments in warmer conditions earlier this winter, I think the down mittens inside my pogies will be the best option if shit gets unreal and we see -50º or worse.

My frostbit nose and cheeks demand some special care now too, so I’m planning both to use Dermatone as a skin protectant and to wear this crazy balaclava from 45NRTH that is basically a neck gaiter, a light hat, and a nose guard all in one. As needed, I’ll add a regular hat (or my Black Rock down hat) and a heavier neck gaiter.

All of those layers have to fit under my Giro Timberwolf helmet, which is as ridiculous looking as it is warm. The helmet also carries one of my two Princeton Tec Apex headlamps. The other is strapped to my handlebars. Between the two lamps, I can throw quite a bit of light down the trail, which is important since I’ll be in the dark for at least half of my race time.

And I am fine with that. Better than fine. I love riding in the dark. 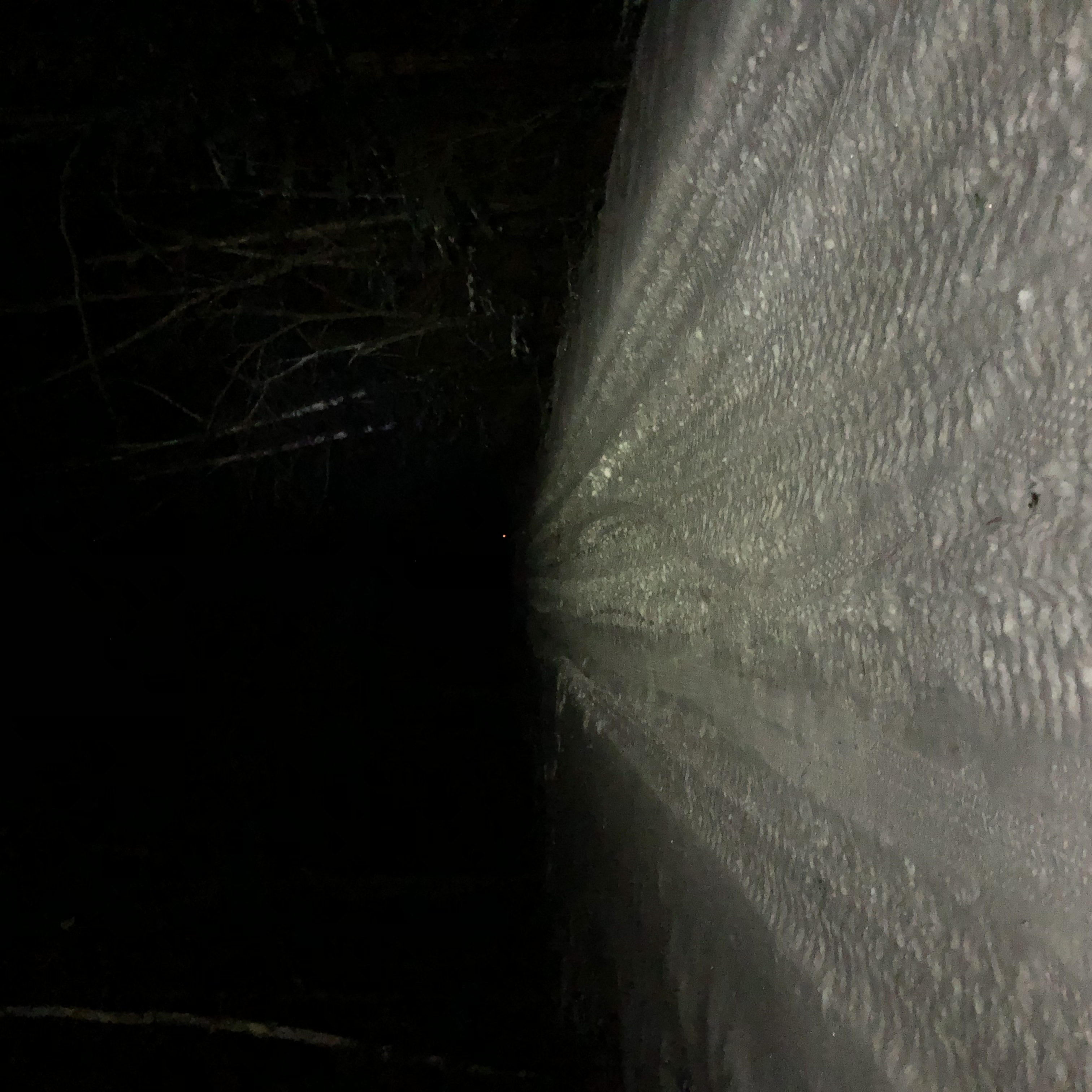 The peace, the solitude, the quiet, and yes maybe a little whiff of fear – I love it and can’t wait to experience it again. Someday I hope to go up north and spend a day on the parts of the Arrowhead trail that I’ve only ever seen in the dark. This year, though, I’ll relish seeing that six feet of light in front of me all night. I hope I can follow it all the way to the finish at Fortune Bay!

One thought on “Countdown to Arrowhead 6”