I don’t think I’ve thought about what it might be like to be an animal for decades – probably since I was a little kid. Well, maybe I do a little imagining now and then. Swooping down a long hill on my bike, I might wonder if I feel anything like how a hawk might feel as it dives out on the clouds onto a hapless rabbit.

That imagining pales next to the deep and deeply weird imaginings and the even weirder doings that British writer Charles Foster describes in his book, Being a Beast. Concerned – obsessed – with the experience of being an animal, Foster states on the first page of the book, “I want to know what it is like to be a wild thing.” He not only tries to think about what it must be like to be a badger or a fox or a swift, but even tries to be a badger and a fox and a swift, going so far as to eat earthworms like a badger, to skulk through urban streets like a fox, and to – well, he can’t be much like a swift, which spends weeks aloft migrating between Europe and Africa. Mindbendingly bizarre, these experiences are also – thanks to Foster’s human command of language – entertaining examinations of the biology and psychology of being a beast (all of which include scores of engrossing facts about the natural world) and a set of cases in which Foster tries to be those different beasts. 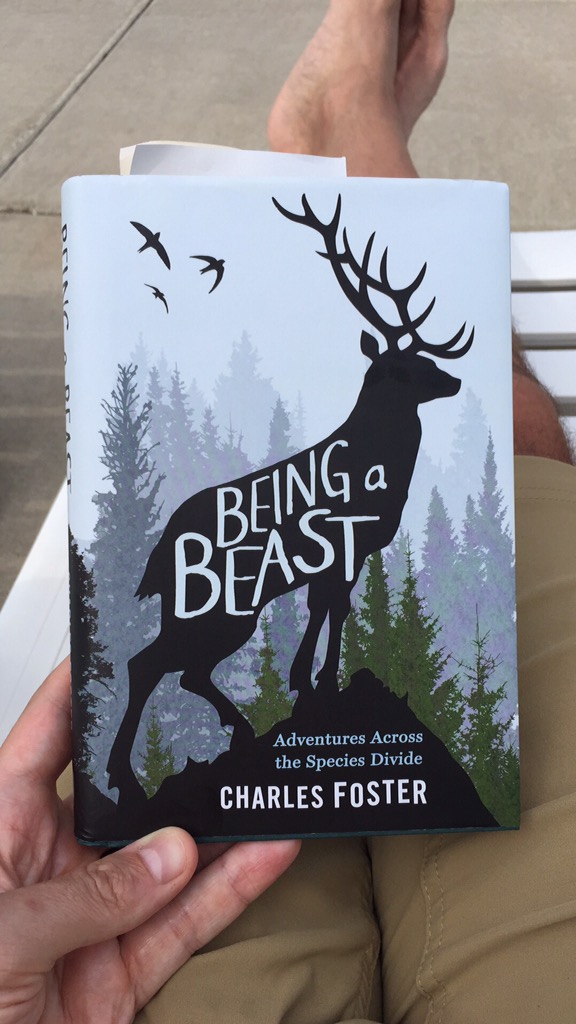 It’s safe to say, I think, that very few people – at least in the industrialized West, where we have so safely and brutally segregated our lives from nature – are willing to go to Fosterian lengths in imagining an animal’s existence. Hunters, as he shows in the red stag chapter, might come closest, trying to duplicate aspects of wolf-ness. I like certain kinds of extreme fun in nature, but I don’t think I’d sleep in a cave in a riverbank like Badger Foster, belly-surf down a river like Otter Foster, run through the fields like Stag Foster, or eat trash scavenged from a garbage bin like Fox Foster.

Maybe because most of us aren’t willing to go one-twentieth as far toward animal-ness as Foster, Being a Beast serves as an extended essay on a wild kind of human eccentricity and a moving consideration of a human kind of longing for the wild. For many of us, segregated in our cars and houses, this longing is imagining the freedom that we think is at the core of animal experiences. Animals experience more than freedom, of course: hunger, exhaustion, terror, as well as satiety, restedness, calm – and maybe even a sense of happiness in doing the things that make them what they are. Foster writes:

I can’t always be in the wild. Sometimes I have to be in places that smell of fear, fumes, and ambition. When I’m there, it helps very much to know that badgers are asleep inside a Welsh hill, than an otter is turning over stones in one of the Rockford pools, that a fox is blinking in the same sun that makes me sweat in my tweed coat, that a red stag is cudding among ghost trees by a stone circle near Hoar Oak, and that there’s a swift, hatched above my Oxford study, hunting, almost beyond human sight, in the high hot blue over the Congo River. That these things should be a comfort is strange. They should taunt. They should say, “You’re not there. Ha, ha, ha.”

This knowledge that animals are leading their unknowable lives while we lead ours is a comfort to me too. I find my own mind wandering, when I’m tired or stressed but also when I’m satisfied or calm, to visions – experienced directly, stolen from photos and films, and fully imagined – of bison, my favorite unknowable animals, out there in America, doing bison things. It’s a relief and a pleasure to know they’re there while I’m here. That there are wild beasts that I’ll never become.