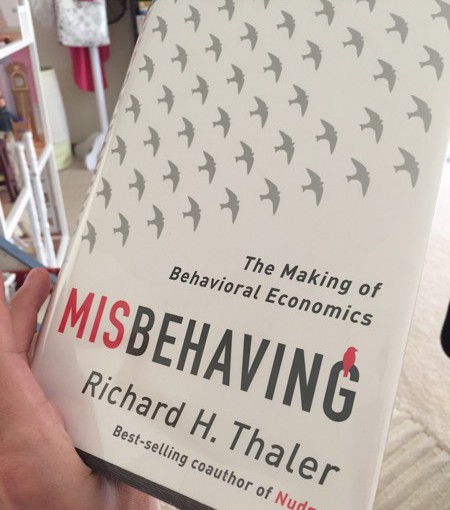 A year or two ago, I read and loved Thinking, Fast and Slow, the huge but ceaselessly fascinating book by psychologist Daniel Kahneman in which he explains how and why humans think – and mis-think – the way we do. Though thoroughly theoretical and empirical, Kahneman’s book is also a deep fund of ideas for thinking better – for instance, how to make better decisions by defying the natural (or seemingly natural) human penchant toward loss aversion.

Having really enjoyed the survey of behavioral sciences in Thinking, I have been eager to read Robert Thaler’s Misbehaving, a much less formal but no less interesting book in which Thaler applies behavioral-science ideas to his home discipline, economics. 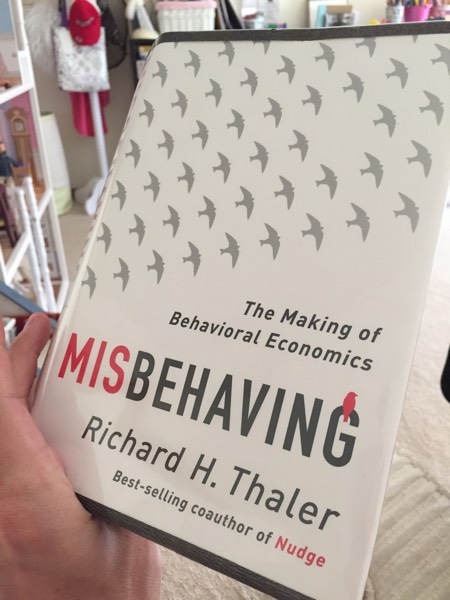 Structured chronologically as a sort of history of behavioral economics, the field invented by Thaler and others like Kahneman and their mutual collaborator, the late Amos Tversky, the book explores the failings of standard economic theory to explain how actual people make actual economic decisions, from buying blankets to saving for retirement.

Far from being dry, the book is often hilarious, with Thaler telling funny stories from his (and his innumerable collaborators’) experiments, from history and current events, and especially from academic battles with traditional economists, especially in and around the University of Chicago, who adhere to the idea that people are (or can be) fully and inerrantly rational economic actors. Thaler calls these mythical figures "Econs," to distinguish them from the "Humans" who are intermittently rational but who are also subject to all kinds of cognitive and behavioral errors, flaws that are seemingly grounded in "human nature" – though Thaler thankfully doesn’t delve into that notion.

What sets this book apart from Thinking, and from the few other behavioral-econ books I’ve read, is the breadth and depth of the examples that Thaler uses to substantiate his arguments that humans ("Humans") are flawed thinkers and that standard economic theory often does a poor job of explaining what really happens in the economy and in society. Thaler predictably includes many examples of experimental contrivances like the Prisoner’s Dilemma and the Ultimatum Game, but he also illustrates his theorizing with analyses of game shows, ski-hill season ticketing, and the Uber car service; critiques of the NFL draft, car-manufacturers’ rebate programs, and American retirement-saving policies; explanations of financial crises like Long Term Capital Management and the 2008-2009 housing bubble; and – most amusingly – a look at how the hard-core rationalists of the U of Chicago’s business school ignored economic theory in choosing offices in their new building. As an observer of (much tamer) faculty politics at Carleton College, I thought this chapter was worth the price of admission by itself.

Considered as a whole, Thaler’s book finally offers a subtle but powerful indictment of the idea that markets are the best way to organize economies and societies. Leaving aside the question of whether any market is really "free" (given the reciprocal habits of governments to encourage certain kinds of economic activities and of economic actors to seek governmental aid), Thaler shows that even the economy in which Americans live is riddled with flaws that impede everything from the "correct" pricing of stocks and effective saving for retirement to the structure of mass-merchandiser’ sales. Don’t trust the market, he seems to be saying, and don’t even trust others’ or your own thinking – at least not until you learn more about why and how you think the way you do, and try to misbehave better.