I was probably in elementary school when I first heard people talking about how the area where we lived, Michigan’s Upper Peninsula – a.k.a. Upper Michigan, the U.P., or now, “da Yoop,” – could or even should be a separate state.

This state – North Michigan or perhaps Superior – ought to be separate, the thinking went, due to the stark geographical and demographic differences between the U.P. and the Lower Peninsula – a.k.a. the L.P., “the Mitten,” or just “Michigan.” Anyhow, the only reason “we” were part of Michigan was the stupid compromise with Ohio over Toledo.

I didn’t know then, but was fascinated to learn later, that (as Wikipedia says in its article on Superior) Yoopers had agitated for the area’s statehood in the years just before I was born in the U.P.’s southermost city. This agitation in fact reached a high point just after I was born, with an unsuccessful effort to pull the U.P. and the northerly parts of Wisconsin out of their respective states and combine them into a new state, something like this, which I saw recently on the amazing Lost States blog: 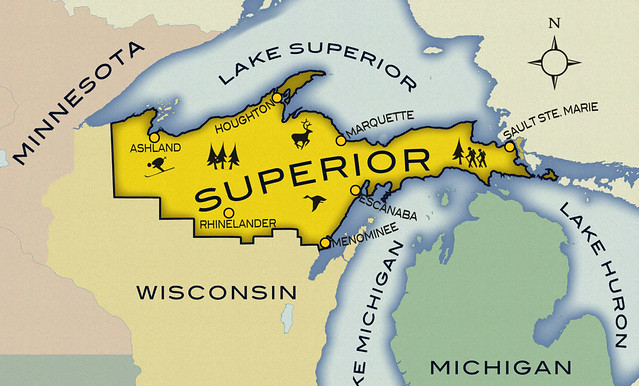 I loved the idea then and I love the idea now, even as I recognize that a state of Superior would probably be unfeasible, if not terrible, as a political or economic entity. (Recent-ish news coverage of the idea says as much here in the Detroit Free Press  and here in the New Republic.)

One of the reasons that Superior would not be a great state is it’s big and empty – Wyoming, but all forests; Alaska, but no tundra. Wikipedia says in its entry on the U.P. (the actual place, not the imaginary state) that “the Upper Peninsula remains a predominantly rural region. As of the 2010 census, the region had a population of 311,361,” of whom only a third live in one of the twelve towns that have populations greater than 4,000 people.

Even if Superior included both all of the current U.P. and the Wisconsin counties that (or almost) border da Yoop*, you’d only get a total population (if you believe those lying liars at the U.S. Census) of 410,340. This scattering of humans over almost 22,000 square miles would make Superior – as of the 2010 census – the state with the smallest population, well behind Wyoming’s throng of 563,626. (The numbers would rise a little, but not much, if you included the several other Wisconsin counties that the Lost States map above include within Superior.)

For comparison’s sake, Wyoming’s capital, Cheyenne, had a population of 92,000 in 2010 – a third bigger than Marquette County, the most populous county in Superior, and 425% bigger than Marquette city, which, with a population of 21,355 in 2010, is the most populous city in Superior. Marquette – as the putative capital of Superior – would be the fourth-smallest state capital, bigger only than teeny-tiny Montpelier (just 7,855 people lived there in 2010!), Pierre, and Augusta.

And like many a rural, underpopulated state full of white people and public lands and almost wholly dependent on tourism and natural resources (in the U.P., lumbering and mining), Superior would probably be a blood-red state. In 2012, all but two U.P.’s counties went for Romney in 2012, and all but one supported the (horrifyingly bad) Republican governor. The U.P.’s fifteen counties – grouped in Michigan’s first congressional district – have elected Republican and Tea Partier Dan Benishek to the House of Representatives in 2010, 2012, and 2014.

So yes, Superior is a terrible idea.

But still, we can have some fun with the idea, right? A few facts, ideas, and guesses about what Superior would be like:

* Running west to east, Ashland, Iron, Vilas, Forest, Florence, and Marinette. The latter is the most populous in the group, and would be the second-most populous county in the state, after Marquette County in Superior.