Saturday morning, I drove up to Elm Creek park in Champlin, Minnesota, for the second running of the Fatbike Frozen Forty race. I didn’t know what to expect, since I hadn’t trained much for the race and have done all my racing on gravel roads, but I was eager for the chance to ride my fatbike – a Salsa Mukluk I call “The Beast” – somewhere outside the Northfield city limits. Plus: snow, sunshine, and *bike racing*!

I knew from the event organizers’ messages and the race website that the race would be well run. It was. Numerous volunteers made parking and registration a snap, allowing me plenty of time to get the Beast ready to ride and to cruise around the parking lot, admiring the hundred or so gorgeous fatbikes on display. Salsa bikes predominated, but Surly and 9 Zero 7 rigs were also common, and I even saw a few Fatbacks. Every single bike was gorgeous. 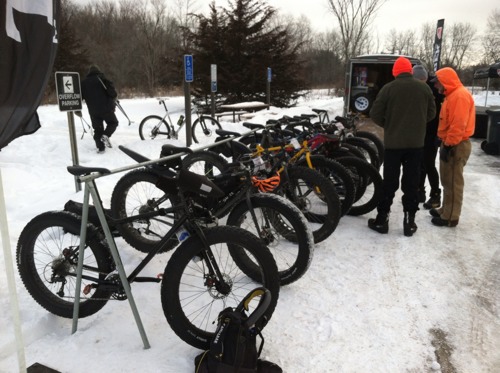 Since I needed to stay warm in the single-digit temperatures, I took a ten-minute ride onto the singletrack trails that would constitute almost all of the racecourse. This little jaunt told me that the race was going to be very technically challenging for me: dozens of sharp but short ups and downs, thousands of twists and turns, and zillions of trees near, along, and in the trail. The snow in the foot-wide trail was pretty soft, so I let about 10 pounds of air out of my tires when I returned to the start area. I must have tweaked the valve stem on my front tire, though, because a few minutes later, another racer pointed out that the tire was completely flat. Thankfully, at a bike race you’re never far from a pump, so I was able to inflate the tire to racing pressure with plenty of time before the gun.

Under clear blue skies (and a circling bald eagle!), the race started at 9:30 sharp, mixing all of the racers who were tackling the full 40-mile distance – solo men and women and the two- and four-person relay teams. After a short neutral rollout, we hit a stretch of trail that spread out the field like warm butter. Everywhere I looked, people were dabbing, crashing, stopping, running. So silly and fun, I started laughing.

We soon hit the singletrack trail, beginning the first of four laps of ten or so miles each. The field was pretty well distributed by now, but I could see and hear plenty of racers ahead and behind. Due to the very tight trail, passing was pretty much impossible unless someone made a mistake. I gained spots when riders ahead of me picked a bad line or hit a tree or whatever, and I lost spots when I did the same. Which was often! At first, I was frustrated at my inability to just stay on the damn trail, but after a half lap or so, I relaxed. I figured I would have more fun, and probably go faster, if I was satisfied with trying to ride *better*, since I couldn’t expect to ride *perfectly* – or even, really, competently. Lap 1 seemed to go on and on, but only because I was completely unfamiliar with the terrain.

When I came back through the start area, after about 1:15 of riding, I stuffed a peanut-butter sandwich in my mouth, guzzled some water, and headed back out. Feeling pretty good, I decided to try to push a little bit. Bad idea. I spent a good chunk of the lap riding off the trail into deeper, looser snow, then wrestling the Beast back onto the path – only to kill my momentum a minute later by smacking my bars on a tree. I hit enough trees that both of my grips have wood jammed into them now: 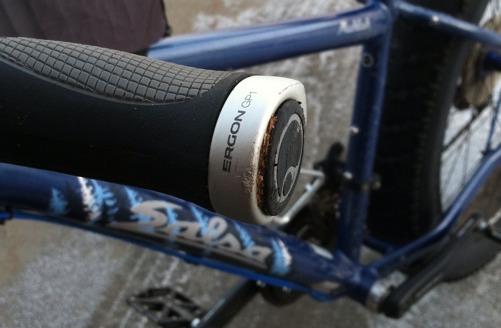 The best moment of the lap came when I slipped off the side of the trail and smacked my head directly into the tree in front of me. The rider behind me asked if I was okay, and when I said I was, he sprinted away, clearly not wanting to be anywhere near my messy riding.

The worst moment of the lap came after I was caught by two racers who seemed to be riding together – a guy on a nondescript fatbike and a woman with a matching pink jacket and bike. They passed me when I whiffed on a tight hairpin turn, but I could tell they weren’t going much faster than I was, so I decided to stick with them as long as I could. And I did, until, inevitably, I bobbled a tight section that they had already cleared. I tried to push as hard as possible to catch back on, knowing they would be good riding partners, but my technique issues doomed that effort, and I settled back into my own pace for the rest of the lap. Speed on singletrack doesn’t come as much from power as from technique.

Those endless troubles aside, I did find that I had good legs, which helped me in two ways. I had plenty of power to surge out of the corners, sprinting (as much as a rider can sprint on a fatbike at 3 psi) to the next corner. Even better, I had the strength to really attack the relatively short, tame uphills, which helped me catch quite a few riders (or, more likely, re-catch riders who passed me when I dabbed). I especially liked two brief sections of prairie trail that connected the wooded singletrack areas: the straightaways were longer, the ups were longer and tougher, the less cramped trails were much less taxing to ride, and volunteers had put up several huge snowmen at entertaining spots. Toward the end of the lap, I started getting hungry, but the demanding trail left no time to sneak a bite of food or a swig of water, so I just plugged along, looking forward to another PB sandwich at the end of the lap. Mentally scanning my body, I was happy to discover that my kit was keeping me warm and dry and that all the key muscles were functioning well.

Coming through the end of lap 2, I downed that sandwich (turns out, frozen peanut butter has no taste), a few handfuls of trail mix (turns out, frozen chocolate chips, peanuts, and raisins are not easy to eat), and two delicious cups of hot coffee from the registration tent. Back on the trail, I was almost immediately caught by the eventual winner of the race, who zoomed past and disappeared up the trail. I was in awe of the fluid ease of his riding. Happily, I was managing to ride better and better, making fewer errors and generally keeping myself going for longer stretches of time. I did manage to take one magnificent spill in the prairie, catching my front wheel and launching myself off my bike into a snowbank. Laughing, I remounted and focused on trying to ride well through the back section of singletrack: Grizzland. 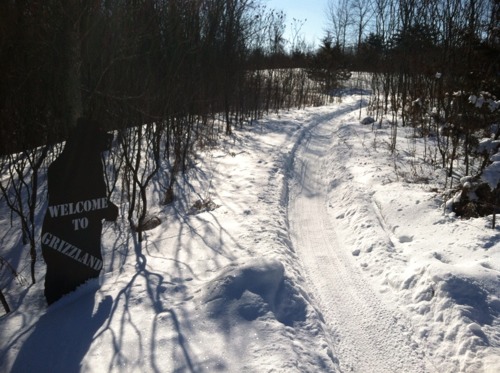 For the first time, I managed Grizzland with a minimum of trouble and, with a better sense of the trails now, pushed harder back to the lap area.

I was feeling pretty hungry by now, so I took a short break at the end of lap 3 to pound a bottle of Coke and crunch as much trail mix as possible. My legs rebelled a little at starting again after the rest, but they came around soon enough. I was pretty much completely alone at this point, which helped me attend to the challenges of the trail. Through the first singletrack section, I was pleased to discover that I was actually riding decently well – maintaining speed and control through corners, negotiating tricky patches of soft snow, staying on the trail when I descended. The prairie section, too, I handled well. At the entrance to Grizzland, I got off my bike to stretch my legs at the wonderful-smelling firepit and chat with a guy who was warming himself there. He passed me not long thereafter when – say it with me! – I bobbled a corner. I stayed within a few meters of him for a while, and even used a longer climb to get back on his wheel, but he rode the technical stuff better than I did and got away within the last mile. The upside to his escape was that I could hear the timekeepers cheer for him when he finished, so I knew I that I was getting close to the end. When I crossed the line – in 5:36:20, good for 32nd place (of 40 finishers) – a spectator yelled, “Great beard!” I had known for hours that I had some icicles going, but I was still surprised to see that my ice beard was in damn good shape (if I do say so myself): 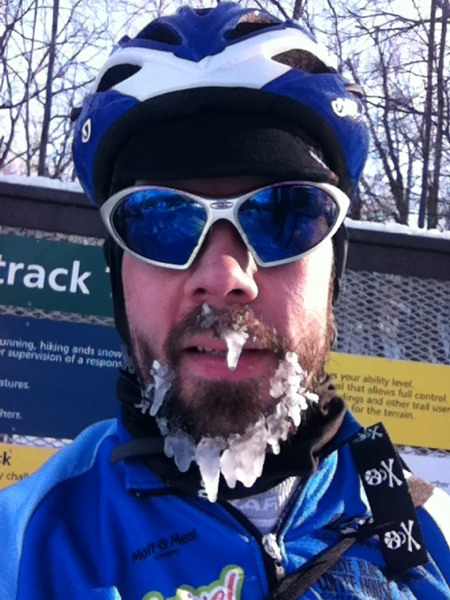 I rode the Beast over to my car and packed it away as quickly as I could, then changed out of my kit. Dry and relatively fresh, I scored a Surly Furious beer, two Cokes, a bag of chips, and a cheeseburger, hot off the grill. I downed all that food – which wasn’t nearly enough – while watching the awards ceremony and the traditional bike-race raffle. I didn’t win anything, but I was more than satisfied with the race’s official swag, a beautiful winter hat. Driving out of town, I stopped for an americano at a nearby coffeeshop. The heat of the drink melted away my icebeard. I’ll try to earn another one at next year’s race.